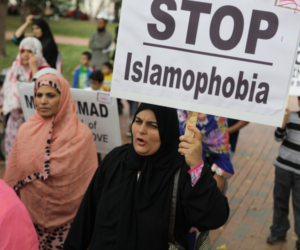 To those who don’t live in Canada, the country from the outside can seem flawless. In a world where intolerance and hate are spreading and those in power are poorly upholding their countries values, Canada has served as the Western World’s utopian country. Democracy, freedom, peace, security, multiculturalism and diversity are all aspects that Canada boasts but lately the acceptance of the Islamic culture in Canada has become a prominent issue.

According to Canada’s 2011 National Household Survey, there were 1,053,945 Muslims in Canada, or about 3.2% of the population, making Islam the second largest religion in the country after Christianity. However in recent years, Islamophobia and the unjustified hatred towards Muslims has become a national problem. Islamophobia in Canada refers to a fear or hatred, prejudice or rejection of Islam and Muslims in Canada.

Although Canadian Islamophobia had been documented in the 20th century, it is noted to have rapidly increased in the 21st century due to the increases in conflict in the Middle East. Islamophobia in Canada also increased after there were incidents of Islamic terrorism in North America and other parts of the western world. One could equally notice the significant spike in hate crimes against Muslims following such incidents. These types of hate crimes included physical threats and the destruction of property such as the defacing of a mosque in Alberta. Islamophobia has often played on the theme of deeming Muslims as irrational and violent, and Islam as bent upon global domination. This is not at all an accurate representation of all Muslims and it is very unjust that the Islamic religion is being painted with this ideology.

For some historical context, most Canadian Muslims are people who were raised Muslim. As with immigrants in general, Muslim immigrants have come to Canada for a variety of reasons. These include a higher education, security, employment, and family reunification. Others have come for religious and political freedom, and safety and security, leaving behind civil wars, persecution, and other forms of civil and ethnic strife. In the 1980s, Canada became an important place of refuge for those fleeing the Lebanese Civil War. The 1990s saw Somali Muslims arrive in the wake of the Somali Civil War as well as Bosniaks fleeing the breakup of the former Yugoslavia. Generally speaking, Canada has received immigrants from almost every Muslim country in the world -from Pakistan, Bosnia and Herzegovina and Albania to Yemen and Bangladesh. In recent months, Canada has welcomed many Syrian refugees and now more than 77,050 are living across Canada.

In addition, as the Canadian Charter of Rights and Freedoms guarantees freedom of religious expression, Canadian Muslims face no official religious discrimination. Under Section 2(a) of the Charter, the wearing of a hijab is permitted in schools and places of work. However it is sadly common for those wearing the hijab or niqab to face religious discrimination or to even simply receive eye stares in public.

Interestingly enough, statistically speaking, Canadian Muslims have an overwhelmingly strong sense of pride in Canada despite facing higher levels of discrimination than experienced by the general population, according to a new survey. A Canada wide survey conducted by the Environics Institute found 83 per cent of Muslims say they are “very proud” to be Canadian, despite the 35 per cent who report having experienced discrimination or been treated unfairly in the past five years. “So far we have had nothing but acceptance and support from the Canadian community in Winnipeg,” said Bashir Khan, a Canadian Muslim.

Canada acknowledges that Islamophobia is present in its societies and is working on educating its population about the culture and religion of Islam so that ALL who live in Canada feel welcomed and safe and not discriminated against in any way. I can only hope that those who have misconceptions about Muslims and their religion and culture can reverse their views and start to get to know the true, loving and kind people of the Islamic religion.