Apology for the Past and Future

Apology for the Past and Future

Across the world and in many countries the LGBTQ+ community have been victims of persecution, discrimination and incarceration. Youth and adolescents have been ridiculed and bullied for identifying as gay, lesbian, transgender, bisexual, or any sexual or gender identity other than societal norms. This has had a huge impact on youth and even older generations who had to live in a world  that was not willing or open minded enough to accept them for who they were. Due to this, persons in the LGBTQ+ community had to hide their true selves and pretend to be someone who they weren’t. This was often followed by depression, a decrease in self esteem, suicidal thoughts and an overall decrease in good mental health.

Over the years in Canada, we have been striving to break the silence and bring acceptance and equality for all people who identify as LGBTQ+.

On November 28th, a groundbreaking event happened in Canada that changed it’s history. This event acknowledged and reconciled Canada’s past mistreatment of the LGBTQ+ community and issued an official government apology to all hurt by the governments actions in regards to the persecution of LGBTQ+ members. 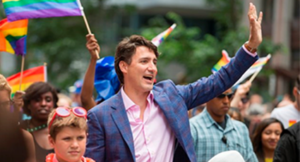 Justin Trudeau, the current Prime Minister of Canada announced on social media: «On November 28, the Government will offer a formal apology to LGBTQ+ Canadians in the House – for the persecution & injustices they have suffered, and to advance together on the path to equality & inclusion.»

In addition, Canadians who were criminally charged or fired from the military or Canada’s civil service because of their sexual orientation will receive a formal apology from the prime minister before the end of month. Also those who were convicted for having sexual relations with same sex partners will also receive an official pardon.

This event brings incredible joy and relief to the LGBTQ+ community. The apology said by many to be long overdue represents an important step toward both individual and collective healing. Addressing historic wrongs is important. An apology, as an acknowledgement of wrongdoing, can offer a starting point for moving toward a more socially just and honest future. Lastly, when governments take responsibility for the harms they’ve caused, it communicates to those affected that their experiences are valid and that those who have committed wrong doings will be held accountable.

Youth of Canada are now more than ever, free to identify as their true selves and be proud of their true identity!