One of the most common health problems among millions of children across the world and whose treatment can also solve a major environmental problem lays within a relatively common, inexpensive and yet incredibly important metal: zinc. Zinc deficiency among children is one of the leading causes of major illnesses in many countries and affects up to one-third of the global population, and yet it is abundant in trillions of tons of single-use batteries that are currently posing as a severe environmental and safety hazard to millions of other children and their families.

Zinc is the second most concentrated trace mineral found in our bodies and is found in billions of cells all throughout our bodies. It is needed for the body’s defensive (immune) system to properly work and effectively fight off invading viruses and bacteria that enter the body and plays a role in cell division, cell growth, wound healing, and the breakdown of carbohydrates. Adequate zinc nutrition is essential for ample growth, immunocompetence and neurobehavioral development, especially during infancy and childhood. Inadequate zinc in the body can cause concerning symptoms, such as tremendous weight loss, poor wound healing, delayed sexual maturity, hypogonadism, and a poor immune system, the latter consequently causing individuals to develop more often infectious illnesses, such as respiratory infections, diarrhea, eye and skin lesions and disorders. DNA damage has also been reported from only minor zinc deficiency, according to a paper published by Oregon State University.

Unfortunately, despite its importance in basic motor and gross development in children, more than 1.1 billion people across the globe suffer from low to moderate deficiency (as severe zinc deficiency is rare), particularly children living in sub-Saharan Africa, South Asia, and international refugees. In fact, the World Health Organization estimates that 800,000 global deaths in 2002 occurred solely due to zinc deficiency-related reasons and that zinc deficiency accounted for about 2.9% of worldwide loss of healthy life years in the same year (Graph).

The primary reasons behind the high mortality rate is attributed to two things: the lack of sufficient zinc in the diets of affected children and the effects on the body due to the aforementioned symptoms. Symptoms such as diarrhea cause losing excess amounts of zinc from the body, such as through poor absorption, which can ultimately cause death if the amount loss is supplemented quickly enough.

Similarly, lack of zinc due to major illness (caused by zinc deficiency itself) and malnutritious food causes children to become underweight, which puts them at increased risk of mortality from infectious illnesses such as diarrhea and pneumonia, with such infectious illnesses also tending to be more frequent and severely impactful on such children than those who have sufficient zinc in their bodies. For example, worldwide, zinc deficiency alone is responsible for approximately 16% of lower respiratory tract infections, 18% of malaria and 10% of diarrheal disease. The malnutritious food of affected children that is largely attributed to zinc deficiency is a violation of the rights guaranteed to these children by the United Nations’ Convention on the Rights of the Child. Article 24, which states that every child has the right to nutritious food (among other things) and Article 27, which states that every child has the right to food and should not be disadvantaged in a way that will result in them not being able to do many of the things other children can should be taken into consideration. The concerning effects on those suffering zinc deficiency such as weight loss & fatigue, diarrhea, and pneumonia fulfill the conditions that prevent affected children from doing things such as attending school regularly and enjoying healthy and robust lives, and thus is a violation of Article 27 and must be restored immediately. 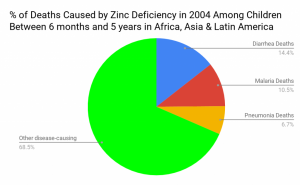 How is this to be accomplished? Interestingly enough, the solution to this global problem is already present in a source full of billions of tons of unwanted and discarded zinc: batteries! The increasing presence of batteries have been identified as a problematic material in waste streams and landfills, and are often shipped for disposal in countries where zinc deficiency is common. They pose as a serious threat to the environments of children living near or even miles away from their disposal site, as they contain a variety of chemicals such as nickel and cadmium to power their reactions. These power-fuelling chemicals, which react with zinc in batteries (with the zinc being able to be extracted safely for consumption later on) are extremely toxic, and can cause water pollution, endanger wildlife, damage soil micro-organisms and affect the breakdown of organic matter. It can also bioaccumulate in fish, which reduces their numbers and makes them unfit for human consumption. Such damages to the soil and food in turn make it either inaccessible or inconsumable for children, thereby resulting in and/or are attributed to the zinc deficiencies they presently suffer from. When zinc is extracted from batteries, these batteries must be recycled, which effectively reduces its impacts on the environment and saves battery manufacturers and other companies large amounts of capital. Furthermore, the toxication of the environment through battery disposal violates the rights of the children affected, as Article 24 states that every child has the right to a clean and safe environment. Single-use batteries disposals which result in the aforementioned negative effects on the environment pose a major health concern for children and thus proves the violation of Article 24.

Thus, it can be concluded that the international zinc deficiency among children and the widespread disposal of single-use batteries in landfills, commonly in the same regions where zinc deficiency is widespread among children, are violations of the rights guaranteed by the United Nations’ Convention on the Rights of the Child, particularly Articles 24 and 27. The solution to restoring theses two violated rights to affected children is recycling and subsequently the extraction of zinc from batteries. The WE Organization, North America’s largest not-for-profit, UNICEF, the World Food Programme, and Teck Resources Limited are just a few organizations that are already working towards restoring the rights of children through this process.

So what can YOU, as a child or teenager do? The success of the whole restoration of rights project relies on YOUR efforts. The key is one world: RECYCLE. Once your batteries have finished their energy, don’t chuck them in the garbage bin. Instead, search on the Internet the nearest battery-recycling site near your home. You can dispose of them in the one-day Household Hazardous Waste depot located throughout your city, while your municipalities will have offices for their collection. Libraries throughout Canadian cities are known to collect batteries, while organizations such as GreenUp also collect batteries. Additionally, switch to rechargeable batteries instead of single-use versions; after all, they’re cheaper, more convenient and are better for the environment. Finally, hold a battery collection drive in your neighborhood or school. You can then ship these batteries to WE Organization (which holds battery collection events for zinc extraction throughout the year) or GreenUp.


Whatever you do, know that the possibilities of helping restore the rights of a single child are endless!